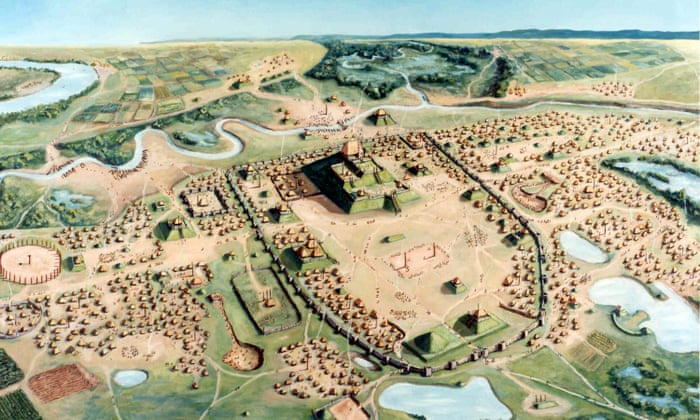 So the final continent of Age of Iron that will be covered is the far western (or far eastern depending on how you look at it) landmass of Anahuac. Anahuac is supposed to represent the Americas, and despite two distinct landmasses they are considered one continent.

Now Anahuac I have probably had the most trouble with in regards to what do with the setting. Not very much is known about America during the medieval times - partly because there were very few concrete 'nations' in America then and partly because colonialism and imperialism probably destroyed what records did exist. Many Native American cultures had oral records rather than written records, and of course those change and disappear as time goes on. So for a fantasy game, it's hard to pin down more than generalities.

I also encounter the same issue faced with Ifri, which is one of privilege as a white male writing about marginalized cultures. But once again unlike Ifri, pre-Columbian history is often shrouded behind a fog making it hard to just base areas on literal historic analogues.

I've thought of a few approaches on how to handle Anahuac, which I'll detail now.

Approach 1:  This is kind of a more 'simplistic' approach and most in line with what WFRP had. The regions would basically be siabra in the north, aztlan in the south, a Caribbean-analogue and a Native American refugee region somewhere in between.

The main issue with this is the Native American region, tentatively titled Hah'nu'nah. There are literally hundreds of Native American tribes that still exist today, and that number only increases as you go back in time. Hah'nu'nah would be very hard to generalize without the broadest of broad strokes. Obviously I wouldn't be offensive, but I'd risk being uninclusive.

Approach 2: This is similar to Approach 1, but I break the Native American nation up into multiple regions. These would be based on major cultural areas and not specific tribes, so there would be a Plains Native area and a SW Native area.

This would provide a more detailed approach, but it would also increase the chances of me getting something 'wrong' unintentionally, which is also something I don't want.

Approach 3:  Similar to 2, but it would focus exclusively on pre-Columbian agricultural civilizations - mainly the Pueblo, the Mound Builders, the Inca, etc. This would probably be easier to do justice to than Approach 2 and more detailed than Approach 1, but it'd still be a significant project.

Approach 4: The final approach, Approach 4 would be to just not cover Anahuac. Instead Tellus would be restricted to the "Old World", i.e. just Ifri, Europa and Aswai. Anahuac would exist, but as a myth or a scientific possibility rather than an adventuring area. I'd then transfer the siabra, aztlan and pirates to nations in the east.

This solves the problem of not doing the Americas justice by just eliminating the problem, but it would reduce the WFRP-ish nature of Age of Iron and kind of make it something more like Conan. Not entirely a bad thing, but it'd just be different.

That's kind of where I am right now with Anahuac, and any ideas or suggestions you all could make would be much appreciated. Obviously I'll make a decision eventually, but what that exactly is yet remains to be fully seen.
Posted by Tanner Yea at 2:47 PM