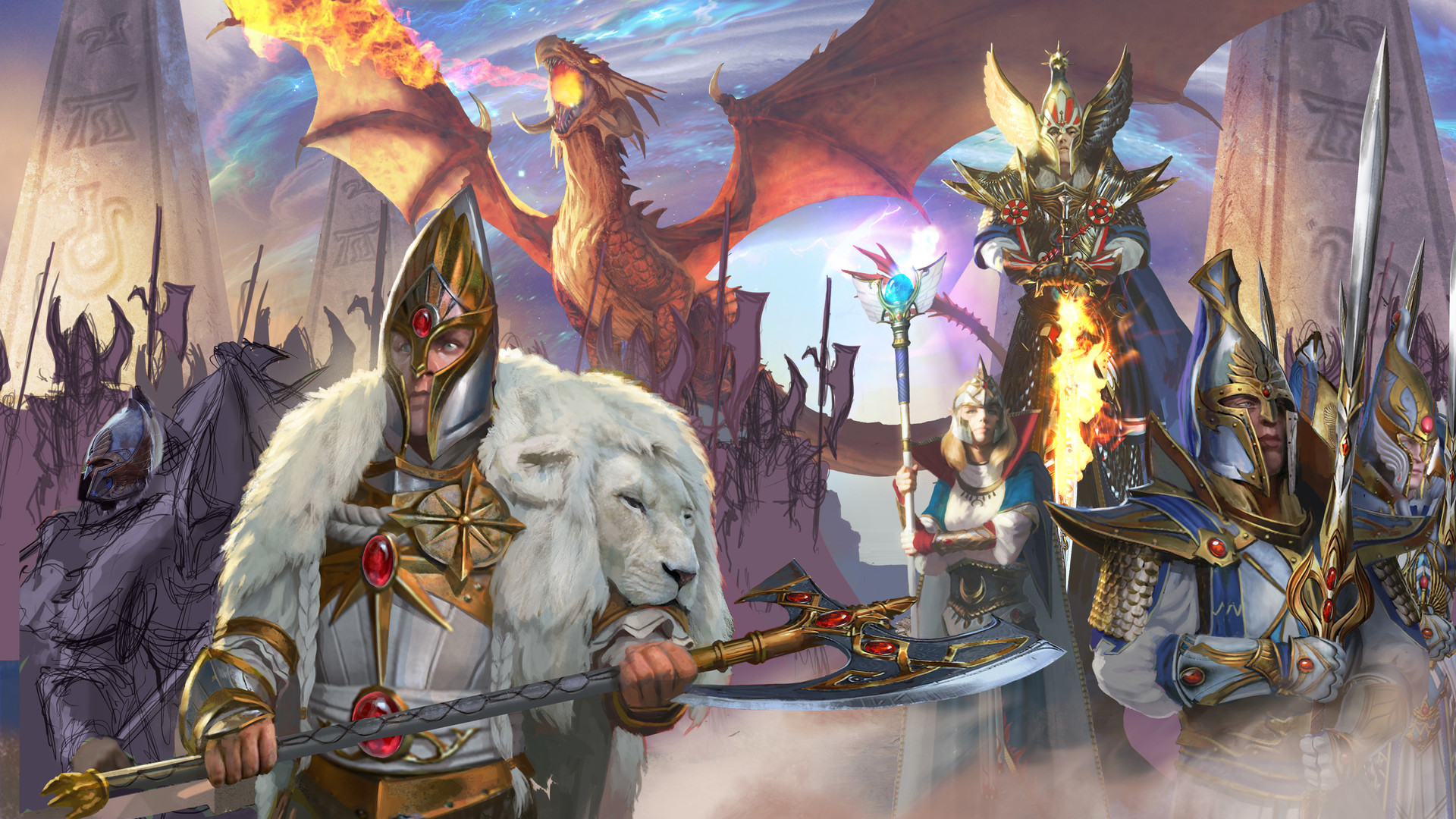 Inspiration: British Empire ruled by elves, albeit going through an isolationist phase

The isle of Avalon sits far off the coast of Europa, obscured to outsiders by a heavy, near-blinding mist. The ancestral homeland of all elves, it is now the sole home of the haughty and noble imperial elves. The fortunes of the elves and Avalon tend to ebb and flow with time, but their presence can always be felt around Tellus thanks to their impressive navy and culture. Since the War of Corruption, however, Avalon has become more insular by abandoning many of their colonies and overseas holdings. Combined with internal strife and a declining birth rate of unknown origin, many feel the sun may be finally setting on this once grand empire.

Lay of the Land

Avalon is a singular large island, surrounded by countless smaller barrier islands and protected from the rest of the world by a magickal mist created by the elves' most powerful mages. Though the waters approaching Avalon are rough, the island itself is ruggedly beautiful - rising highlands plunge down to sweeping moors and broad, dark forests. The island is utterly suffused with ambient magick and its effects, but Avalon's elite military has ensured the most monstrous creatures have long been eliminated. In the more remote parts of the island, creatures like dragons, unicorns and rocs thrive while they remain rare legends in the rest of Tellus.

High Queen Marya and High King Charion rule over the whole of Avalon and its many imperial holdings, serving as dual leaders advised by a trusted monarch's council. They have ruled for nearly two centuries and have slowly turned the nation inward in order to best protect their people. Underneath them, the empire is divided into multiple realms each ruled by a High Lord - generals, mages and nobles who all report to the High Monarchs via the House of Lords. The High Lords often have intense rivalries with one another, but proper imperial decorum and a struggling empire prevents them from coming to blows beyond political ones.

Imperial elves like to think of themselves as educated, cultured, worldly and disciplined, and in essence this is true. However, this often results in Avalonians coming off as aloof, superior, privileged, arrogant and dismissive towards non-elves. While not overtly hostile, Avalon's imperial nature has gained them both rivals and enemies abroad - something the current High Monarchs are trying to repair after centuries of strife. Few imperial elves even ever have a desire to journey beyond Avalon or its colonies, but those that do tend to be more grounded, friendly and tolerant than their brethren who prefer to stay in the comfort of the island. 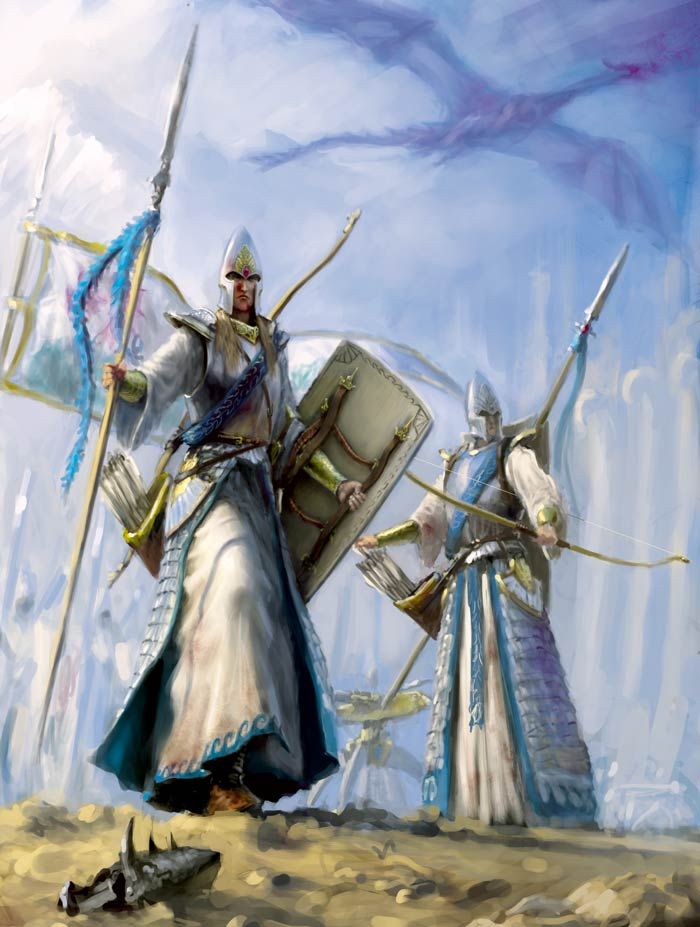 Avalon's cities and colonies are large and beautiful. The soaring marble architecture, wide ports and protected roadways have all been carefully tended with magick and constructed by the best engineers on Tellus. The towns are modest and humble, but even here lie beautiful churches and castles that date back centuries. Imperial elven architecture is distinct, impressive and can stand up to the very worst sieges.

Caer Lud is the capital of Avalon, as well as the empire's largest city. The port is the largest known port in all of Tellus, and goods are ferried in-and-out every day to Avalon's many colonies and trade partners. Many non-elves have immigrated to Caer Lud in hopes of improving their lives, but unfortunately most of them are treated as second-class citizens, given the most menial jobs and forced to live in the worst of the city's slums.

Caer Dine lies in Avalon's west and is strictly off-limits to nearly all residents. Once the homeland of the siabra, Caer Dine was rendered a smoking ruin after the War of Brothers. Avalon has the ruins under constant guard by soldiers and arcanists as the siabra have tried to retake their old capital multiple times. Much of the land has soured and withered thanks to the many conflicts and magickal taint of the siabra.

Caledon is situated far in the highlands of north Avalon. Inhabited by an ancient kith of sylvan elves, Caledon has managed to resist Avalon's suzerainty for centuries. The land surrounding the small settlement is much more untamed than the rest of the island, and its said the Caledi druids have pacts with local nephilim and bogbeasts to protect their ancient and insular way of life from being intruded upon by the imperials.

Eire is not a city, but rather a large island that supposedly warps around all of Tellus - anchoring near Avalon consistently once every century or so for a season. Those who have journeyed to Eire have never returned, but rumors abound that is the capital of the fomorians. The only proof of this is fomorian raids tend to increase when Eire is present, but this could just be conjecture from delusional and frightened fishermen.

Conclusion: Sorry for the delay, but here is Avalon - and I think it came out pretty well! I'm still kind of in the air about Caledon (aka WFRP Albion), but I'm really not sure if it NEEDS a full write-up. I just think a Celtic human faction and a Celtic elven faction just covers too much similar ground, and I'd rather just give Albion a wink and a nod rather than a whole region to itself. Not sure what's up next description wise, but I was feeling Al-Hilal.

Edit: Changed a few minor things regarding government, but nothing major.

Edit 2: A few more changes. Made Caledon into a cadre of sylvan elves rather than humans - I think the 'sylvan elves as Celts' approach is really the way to go.