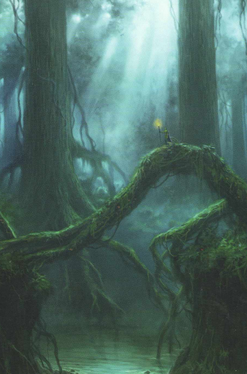 Today, I'm going to be covering the elves - or Aelfar in their native language.

All elves used to be united as one people, but the War of the Ancestors and the War of Brothers splintered them into three different peoples. All Aelfar are still biologically the same and can interbreed, but their cultures are so different and the bile so hot inbetween them that they have very little desire to.

Sylvan Elves: Sylvan elves are my wood elves - survivors of abandoned elven settlements after the majority of elves retreated to Avalon following the War of Ancestors. Pockets of sylvan elves can be found in nearly any major forest across Tellus, but the largest concentration is in the magickal forest of Tirannwn (formerly called Eire) - located between Couronne and Aquilla and bearing the kingdom of the same name. Sylvan elves are tough, spiritual and determined, but they tend to isolate themselves from the rest of the world. They rarely leave their forest homes, and those that do are either outcasts, rebels or something altogether strange.

Siabra: The siabra are of course the dark elves - rebellious elves who warred against Avalon, eventually separating and forming their own dread empire of Dinetah far in the western continent of Anahuac. Siabra ply the seas in search of ports to raid and people to enslave and exploit, mooring their massive city-sized galleons wherever they please. Imperial and sylvan elves distrust each other, but they both despise the siabra. Siabra are mainly cruel and vile, but history shows a few of them have come to their senses and rebelled. If they somehow manage to escape imprisonment and execution, they only have a hard life ahead of them.