Since I'm done with Psionics of Lore, I can focus on other things. Namely, maybe some Basic 4e.

All day, I've been wrestling with classes, mostly on a power front. I was concerned about some classes, just as Avengers and Ardents, not being as strong classes as others. Also, some of the classes could just be utilized by simply throwing around some bonuses.

Then it occurred to me: I'll reduce the classes, and instead make the "real" classes as something akin to archetypes.

Thus, a class would be composed of three things: the Class, the Archetype. The Archetype would also provide the role of the character. I believe the class and the archetype would offer one power each, and in addition to the character's race, they will have three "permanent" powers at first level.

The classes would be based on power sources

The archetypes would then be the normal classes. Thus, the Archetypes for the Mentalist are the Monk, Battlemind, Ardent and Psion.

I actually like this approach a good deal. It may abolish my race-as-class idea, but oh well.

Also, I have decided that to keep with the spirit of B/X, the max level for Basic 4e will be 12. There will still be paragon and epic tiers, which will be at levels 4 and 8 respectively.
Posted by Tanner Yea at 5:37 PM No comments:

Psionics of Lore - Now in Layout!

I just sent the files for Psionics of Lore to John Stater, and soon you will have all the mentalist goodness for B&T. Once again, this will be free, and unfortunately art-less. In the future, I hope to "re-do" these supplements with some art. I was going to do some for this supplement, but I felt it has been delayed for too long.

The supplement will contain 3 new races, 3 classes, about 12 feats, hundreds of psionic powers, dozens of psionic items, and a handful of psionic creatures. Aside from things that mechanically clashed with B&T, the only thing I didn't include was the soulknife. This is only because John is releasing that class in his NOD Companion book, which is coming soon I believe
Posted by Tanner Yea at 10:15 PM 3 comments:

Review of Spears of the Dawn 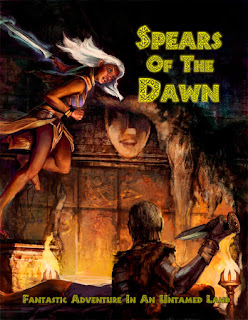 I've been getting pretty into alternative fantasy settings lately, and I think it would be worthwhile to review a pretty great one. This time, I'm reviewing Spears of the Dawn.

SotD is written by Kevin Crawford, the same guy who wrote the awesome Stars Without Number and Other Dust games. Spears of the Dawn is designed to follow the same general setting idea of Dungeons & Dragons, which is one of a pastiche of cultures brought together by magic, monsters, gods and demons. However, instead of medieval Europe, SotD deals with medieval Africa.

The PDF product is only 180 pages long, but if you have read any of the other Sine Nomine products, you know those are a dense 180 pages.

The system is basically the same as Stars Without Number, which in itself was a modified version of B/X D&D. Combat is rolled on a d20, with skill checks being rolled on a 2d6. It's all pretty standard fair, not too simple but not intimidating. Combats go quick, skill resolution is a breeze, and the game never lags.

What is important is the setting behind SotD. The default setting takes place in the Five Kingdoms, situated among the Three Lands. The only problem is, there used to be six kingdoms, but the Kingdom of Deshur came under the control of the undead and almost destroyed the other people of the continent. The Five Kingdoms did manage to marginalize the undead threat back into their desert kingdom, and now they are trying to pick up the pieces. An assumption during play is that you are a part of the Spears of the Dawn, a loose organization that goes around and tries to destroy the last remnants of the Deshur.

The Five Kingdoms have real world analogies, though if you know little about medieval Africa, you will have a hard time figuring them out. The Kirsi, a warrior like people who love mounted battle, are equal to heavy military states, most notably Songhai. The Lokossa draw parallels to the Kongo and Benin states in the deep jungle. The Nyala represent the advanced cultures of the Horn of Africa, like Ethiopia and even Morocco, with the Sokone being like the great trade empires of Mali and Ghana. The Meru are nomads such as the Urewe or Zimbabwe, and Deshur is obviously supposed to be pre-colonial Egypt. The Three Lands are the Green Lands, representative of central African jungles, the Yellow Lands, which are the numerous savannas of the continent, and the Black Lands, the inhospitable deserts of the undead Eternal.

There are no demi-human classes in SotD, so it does tend to lend itself more to a swords & sorcery vibe. The classes are Griots, a combination of storyteller and warrior that is much more bad-ass than a bard; Marabouts, which are priests, either of various spirits or SotD's Islam equivalent, the Sun Faith; Ngangas, which are shamans, witches and sorcerers; and the ever-present warriors.

Another great aspect of Crawford's games is the sandbox aspect of them, with SotD being no different. There are suggestions on how to really make the Three Lands your setting, as well as ways to get you to prepare for anything your players decide to do. The book continues with a flavorful bestiary of monsters taken from African myth, as well as some pretty deadly magic items.

SotD holds a unique place in that very few RPGs give Africa as a setting, and even if they do, it is rarely well done. The only one I can think of off the top of my head is Nyambe, which was a d20 supplement designed for more Iron Age Africa play than medieval. What's great about SotD is that you can tell Crawford has a passion and respect for the rich and detailed history of Africa; nothing is condescending, and he describes the world in such vibrant colors that you are aching to play.

I give Spears of the Dawn a 10/10. This game is awesome, the art is fantastic, and the writing is spot on. There may be a typo here and there, but that in no way should detract from your enjoyment. If you are at all interested in either alternative fantasy, Africa, OSR, or even RPGs in general, SotD deserves your attention. You can buy the PDF at DriveThruRPG for about $7.50, along with multiple hard copy options for an additional fee.
Posted by Tanner Yea at 4:15 PM 5 comments: