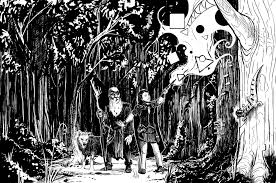 Old School Essentials is a really cool game, and I've been tinkering with it lately. Below, I thought I'd whip up some of the classic sub-races of AD&D demihumans. These are templates to lay over the races provided in OSE Advanced. Unless otherwise stated, most of the abilities are in addition to a race's standard abilities.

The common dwarf is called a "hill dwarf" and has the same abilities as a normal dwarf.

Mountain dwarves are slightly taller and more long-lived than their hill dwarf cousins. Otherwise, they are the same as a hill dwarf. They can only reach level 9 as a Fighter

The common elf is called a "high elf" and has the same abilities as a normal elf.

Sometimes called "faerie" or "sidhe", gray elves are more mysterious and aloof than high elves. Instead of normal elven ability modifiers, they gain a +1 to Intelligence. They can reach level 12 as a Magic-User.

Sometimes called "sylvan elves", wood elves are reclusive and more in-tune with the natural world than high elves. Instead of normal elven ability modifiers, they gain a +1 to Strength and a -1 to Intelligence. They are able to speak Alignment, Common, Elvish, Treant, and the language of woodland mammals instead of normal elven languages. They can reach level 8 as a Fighter, but can only reach level 9 as a Magic-User.

Wild elves are almost primitive, even avoiding contact with other elves. Instead of normal elven ability modifiers, they gain a +2 to Strength. Wild elves can interact with animals as if the Animal Friendship spell was in effect. They also have a 90% chance to set snares, pits, and traps in a wilderness setting. They are able to speak Alignment, Common, and Elvish instead of normal elven languages. They can reach level 7 as a Druid, level 9 as a Fighter, and they can not be Magic-Users.

The common halfling is called a "hairfoot" and has the same abilities as a normal halfling.

The common gnome is called a "hill gnome" and has the same abilities as a normal gnome.

Forest gnomes, as their name suggests, live in the forests of the world instead of underground. Instead of being able to detect construction tricks, forest gnomes have a 4-in-6 chance to blend in with wooded underbrush, effectively making them invisible. Instead of burrowing mammals, forest gnomes can speak with small, woodland animals such as foxes, squirrels, rabbits, mice, etc. They can reach level 7 as a druid, but can not be Clerics.