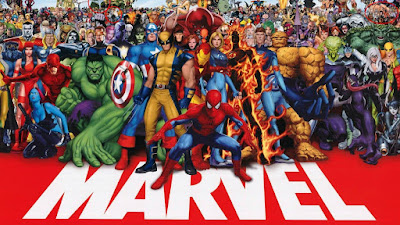 Hey all, hope you are doing well! A quick post today - I'm going to be running Blacky the Blackball's excellent FASERIP with a group soon, and I wanted to work up some Drawback rules to provide an option for the players.

FASERIP is based on the Marvel Superheroes RPG from the 80s, and it is interesting because aside from a few exceptions - like Daredevil - very few Marvel heroes have explicit 'weaknesses'. Seems to be much more of a DC thing.

The rules are somewhat cribbed from 4C Expanded, an expansion to the original MSH retroclone. Hope you get some use out of these, as I think they are pretty neat!

Obtaining a Drawback is optional at character creation, and it's recommended that no character start with more than one (there's nothing stopping you from taking multiple ones, but the character just becomes a headache to play). In exchange for taking a Drawback, a character can:

Drawback In Play
If a Drawback ever becomes relevant in play, if a player works through the Drawback or becomes affected by it, the GM may award them Karma. The amount of Karma varies on the severity of the exposure of event, but generally anywhere from 30 to 70 Karma may be appropriate.
Example Drawbacks
This is only a small sampling of Drawbacks, and players and GMs are encouraged to create their own, similar to limits.
Addiction: The character is addicted to a specific substance or activity, such as alcohol, drugs, sex, gambling and so on. If a character goes an extended period of time without engaging in the substance/activity, they suffer a -2RS to all social interaction rolls until they satisfy their craving.
Arch-Enemy: The character has a rival or enemy who constantly plans their downfall. The arch-enemy tends to be a major thorn in their side and will often come out of the woodwork at the most unexpected - and inconvenient - times.
Marked: The character has some kind of obvious marking or branding that indicates they have been shamed, punished or something similar. When the mark is visible, the player suffers -2RS to any feats of Fame.
Physical Impediment: The character has some sort of physical handicap. This could include things like blindness, deafness, lost limbs, wheelchair use, and so on. When a character must attempt a feat that involves the impediment, they have -3 RS.
Trouble Past: The character is haunted by a terrible event in their past. When encountering a situation that could remind them of this event, they suffer -1 RS to all actions until the situation is resolved or the character can 'snap out of it'.
Weakness: The character has a weakness or vulnerability to a certain substance, energy, object or stimulus. When exposed to the weakness, they suffer -1 to -5 RS (depending on the amount/quality of the weakness) to all feats until the weakness is removed from their presence.
Posted by Tanner Yea at 2:20 PM No comments: