Hello all! Sorry for no AoI update in a while. That doesn't mean I haven't been working on it!

Basically, I realized doing these blog posts put me back at square one production wise. I was basically re-writing the whole supplement/setting again, which I didn't want to do considering all the work I've already put into it.

I have gone back to editing my main Google Docs document, and I'm getting to a good point. I've also included two new entries - an entry for Lygos, elevating its importance and basically turning it into AoI Marienburg, and most likely an entry for the as-of-yet unnamed southern continent that is my not-Southern Wastes/Terra Australis.

In addition to finishing the broad descriptions of the regions, I need to go back and punch them up to make them more dark fantasy. They aren't exactly high fantasy right now, just more historical fantasy. Just want to put a slightly grim sheen on everything if I can.

So that's that, and hopefully I'll have more updates soon. Thanks for sticking around!
Posted by Tanner Yea at 4:05 PM 1 comment: 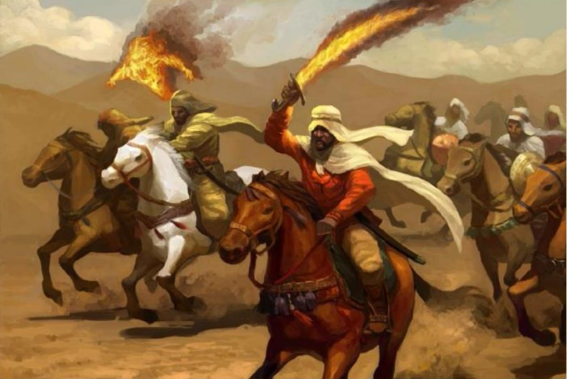 Inspiration: Morocco post-Reconquista, transitioning from the Almohad to the Marinid dynasty, but also a general 'Arabia'

Stretching from the shimmering southern shores of the Middle Sea into the deadly majesty of the Great Desert, Al-Hilal is a land rife with mystery and conflict. Originally founded by desert tribesmen led by the man who would later be called Mazdah, Al-Hilal grew to such heights and riches that for a time it held Hespia under its sway. This all ended with the Great Crusade, which not only weakened the country but planted sedition within it. Though the nation is still powerful and rich, rebellion and hubris has slowly been eating away at it internally - threatening to consume the empire in a civil war or perhaps something worse.

Lay of the Land

Al-Hilal overall is a dry, arid and blisteringly hot country. Most settlements lie either on the coasts of the Middle Sea or the Great Ocean where the land is fertile and trade routes are plentiful. Past the sprawling Atla Mountains, the country quickly turns into the untracked and golden Great Desert - where water is a dream outside of a few rare oasis. Many nomadic tribes live in the desert, making their living as guides and merchants, but countless beasts and bandits also hide among the dunes. Al-Hilal shares a border with Khmet, but so far the Caliph's forces have been able to pick off the few undead sent beyond the cenotaphs.

Al-Hilal is a theocracy that strictly follows the faith of Mazdah, interpreting most secular and religious matters from the holy text The Word of Law. Caliph Abu Dabbus serves as both the head of state and head of the faith, administering all the land that Mazdah once conquered centuries ago. In reality he only directly rules his imperial holdings - the rest of Al-Hilal is divided between sultans, emirs and sheikhs who have varying alliances and loyalties to the Caliph. Many in the north still pledge allegiance to the Caliph and Al-Hilal, but more and more southern settlements are rebelling or declaring outright independence from the nation.

Many in Europa, especially in Hespia, view Al-Hilal as aggressive, war-mongering fanatics, but the opposite is more true. Al-Hilal's booming trade and centers of learning have made its peoples rich, educated, proud, determined and spiritual - in fact, in very few places will you find better hospitality than a Sultan's household, a Mazdahan temple or one of the country's universities. Unfortunately, not everything is so progressive - inequality is rampant thanks to a fairly strict class system, not to mention much of Al-Hilal's economy is built upon a massive chattel slavery trade across the Great Desert that has flourished over the centuries.

The cities of Al-Hilal are large and grand, built out of sandstone, granite and marble and replete with gardens, baths, domed palaces, resplendent archways and beautiful temples. They are built to keep the buildings cool during the blazing days and warm during the frigid nights. Many settlements within the Great Desert are just sprawling nomadic camps, able to be struck down and picked up with relative ease.

Anfa is known as a city of thieves, trade and danger. Almost anything you desire can be found for sale in the markets of Anfa, from the most innocent kettle to dark artifacts of Corruptive power. Much of the city is indirectly controlled by a large network of thieves, assassins and bandits, so illicit trade is often under constant watch by those who would prefer to keep the upper hand in all the transactions that enter Anfa.

Murrkus is the capital of Al-Hilal, located near the coast of the Great Ocean. Murrkus is full of sprawling bazaars, esteemed universities of scholastic and magickal study, beautiful temples, and of course the royal palace of the Caliph. Murrkus is also considered the most holy city in the Mazdahn faith, meaning thousands of supplicants across Tellus make pilgrimages here yearly to best honor the great prophet of their creed.

Salli is oftentimes known as the 'pirate city.' Located on the Middle Sea coast, the corsairs of Salli sail throughout the sea performing razzias (raids) on coastal Europan towns - capturing their residents to eventually sell back in the slave markets of Salli. The navies of Europa have tried to prevent these raids as best as they can, but the corsairs are too well armed and too efficient to slow down very significantly.

Ubar is a lost city supposedly deep within the Great Desert. Once grand and opulent, it's said Corruption consumed the city in fire and violence. Now Ubar shifts in and out of the Material Plane, occasionally unleashing demons or dark warriors into Al-Hilal's wilds. It's believed Ubar holds many treasures, but those explorers who have tried to approach the 'Mirage City' are either slain or disappear without a trace.

Sorry for the delay on this one. I've noticed the hardest part of these entries is writing the locations. They aren't difficult, just kind of more research and time consuming than general research/development on the region as a whole. As for what's next I'm not sure - might go eastward into Aswai, might do dwarves, or I might just do one or two smaller posts about the setting in general. Stay tuned!
Posted by Tanner Yea at 9:29 AM No comments: