So originally I was going to post an entry about classes and that I thought I had my selected classes down, but after going back and forth I've kind of encountered a dilemma.

I think I am going to go the four class route, and I like the old-school design of a combat focused person, a stealth/skill focused person, a support person, and a utility/magic person. Combat is going to be relegated to the Mercenary and magic to Netrunners.

However, the support and skill groups are still up in the air. I have two different approaches: the first is the current idea, which is having the Professional and the Technician. The Technician as of right now is kind of a cleric, with their turn undead being drone control and their powers being devices.

That's why I'm inclined to scrap the Technician and treat it as a background, and instead replace the Technician with a Face-type character - still support oriented, but not a healer and with no access to spells (aka programs). I'd transfer the rigging ability over to the Netrunner, and basically separate the Professional into a thief-focused role and another in a more social-focused role. That way Netrunners are the only 'casters' in the game and thus have a nicer suite of powers to select.

Any thoughts or opinions on this would be much appreciated!
Posted by Tanner Yea at 3:36 PM No comments: 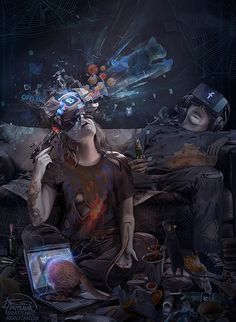 I thought I'd write down some musings about how I want to handle virtual reality/the net/whatever I plan to call it in this game. Encapsulating VR or computer networks are a staple of the game in the genre, and so it needs development.

Though the game will be kind of more old-school in style, I find a lot of cyberpunk has a lot of what TVTropes calls "Zeerust" - almost laughable visions of what people 20 to 30 years ago though the future would look like. For example, in Cyberpunk 2020 there are a few augments that record information onto multiple megabyte microcasettes - it just doesn't work anymore.

One staple of newer cyberpunk and transhuman fiction I like is the universal computer, installed at birth. This allows humanity to experience mixed reality - a strange melding of reality, augmented reality, augmented virtuality and virtual reality. I'm leaning towards calling mine a Neurolink or something similar.

Neurolinks are going to just be very advanced wetware computers, but they will allow people to both experience run-of-the-mill AR and the all-consuming alternate realms of virtual reality. This kind of eliminates the gap of some players not being able to go into virtual realms while the netrunner screws around in cyberspace.

Netrunners will be those who have 'jailbroke' their Neurolinks, and are thus able to run hacks on it which will be spell-like abilities that can both affect mechanical things (drones, robots, weapons, vehicles, etc) and other peoples Neurolinks.

I'm also throwing around the idea of Neurolinks having an onboard AI, which seems like a fun thing to do. But again, I'm trying to keep this game simple for the most part.

Thoughts on the Neurolink? Too cool? Too dumb? Let me know!
Posted by Tanner Yea at 4:55 PM No comments:

After some careful consideration, I have decided to update the skill list slightly. Most of them are there, but I trashed some ones that weren't useful or folded them into others. Currently, the skill list is now:

Of note I broke out the Knowledge skill, scrapped the Profession and Demolitions skills and added the D&D-like Insight for discerning honesty and intention and so on. Let me know what you think!
Posted by Tanner Yea at 4:40 PM No comments:

Welcome back to the design diary of Mohawks & Mirrorshades, where today we are going to cover skills!

So skills have always been important in cyberpunk games, and I wanted to add a very basic skill system to S&W Whitebox to help push that along. Any class can attempt any skill, but each class will gain a bonus to certain skills that increases as they level up.

I'm also considering adding some options of getting training in outside skills as well as training in weapons and armor, based mostly on rules from White Lies.

I looked at a lot of games for these skill lists, but I mainly took from White Lies, Eldritch Tales, Interface Zero d20, Savage Worlds, Modern d20, D&D 5e and some of its derivatives.

Acrobatics - Tumbling, balancing, escaping bonds and so on
Athletics - Bend bars, lift gates, jump far, break chairs
Computers - Very important in VR/diving, which I'll get to later. Doesn't cover hacking, but does cover programming and other computer use
Deception - Includes bluffing, forgery, gambling and disguise
Demolition - Knowing how to handle explosives, where to set them, and how to set them
Engineering - Repairing technology, knowing how it works, and handling explosives
Intimidate - Whether it be physical or just verbal threats
Knowledge - Background knowledge for any type of study you could think of
Language - Knowledge of languages and deciphering unknown ones
Larceny - Picking pockets, picking locks and disabling mechanical traps
Medicine - For both basic first aid and more advanced diagnosis and surgery
Perception - Investigation, sensing motive and honesty, listening at doors
Persuasion - Charming people in all levels of society
Perform - For any kind of artistic or oratory skill, from painting to music to poetry
Profession - Skills related to professions not covered here and how to navigate them. Things like Accounting, Construction, Cooking, etc
Research- Deciphering clues, knowing where to find info and how to use it properly
Stealth - Sneaking around, even if you're dummy thicc
Streetwise - Being able to talk to commoners, dig up rumors and navigate the underground Survival - Surviving and navigating in the wilderness. Also encapsulates handling wild animals (regular animals would fall under Profession)
Vehicles - Everything from grav cars to spacecraft to boats to even the few horses that aren't yet extinct

Some of these skills - mainly Knowledge, Vehicles, Perform and Profession - require a character to choose a focus for the skill, such as Knowledge (History) or Vehicles (VTOL). These skills can be taken multiple times.

I think it's a pretty clean and concentrated list - didn't want to go too overboard with number of skills because it kind of thins out what each character can do.

Like the skills? Think I have too many? Not enough? Let me know!
Posted by Tanner Yea at 11:40 AM No comments:

Mohawks & Mirrorshades: I'm Back with a New Thing 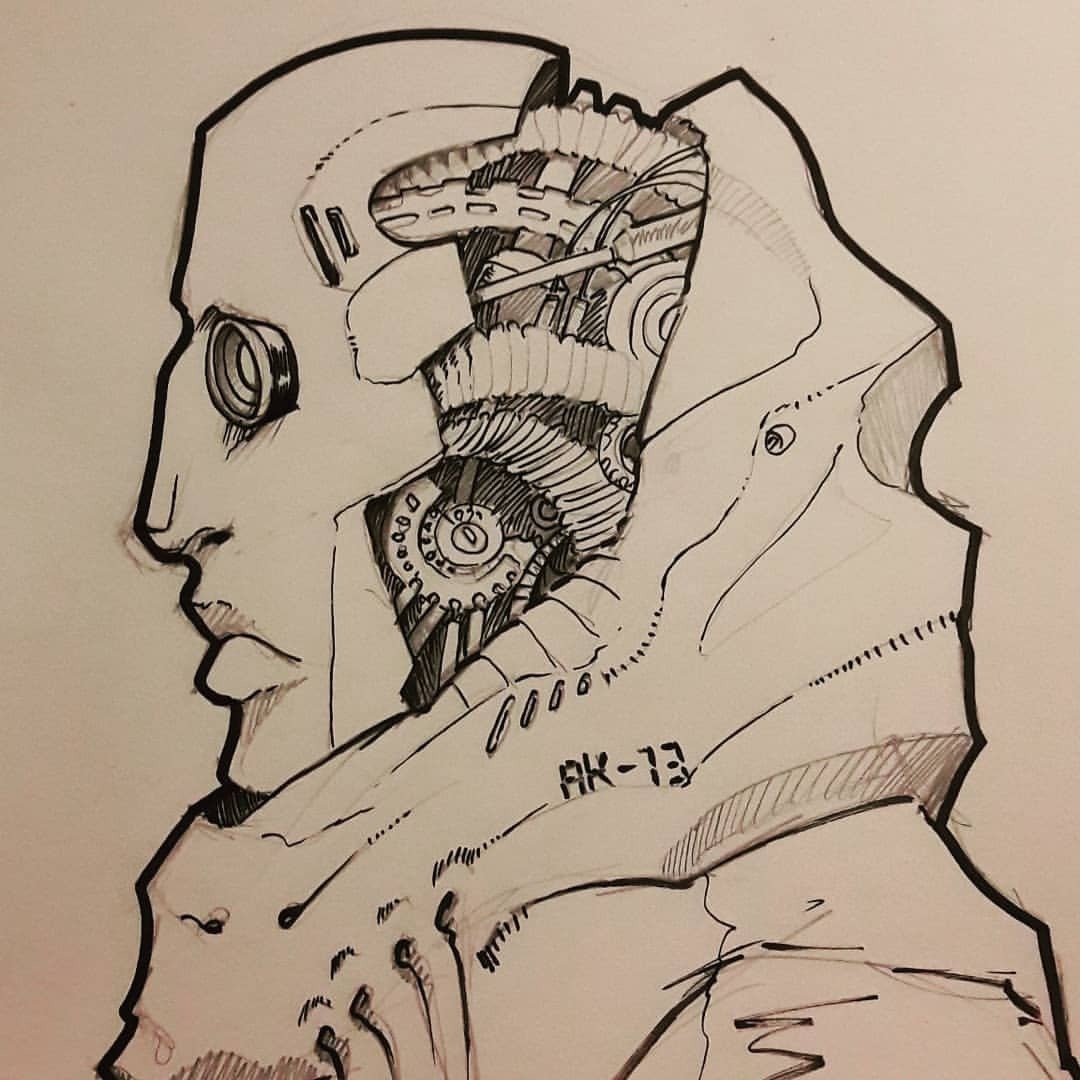 Hello all! It's been, christ, nearly a full year since my last entry. I've been very busy with job and real life stuff, much like last time, but I notice as I continually embark on creative RPG endeavors it might behoove me to dust off this blog and actually write them down here to make me more accountable - I guess.


My first attempt was via Microlite20, which I kind of quickly raged against as I ran into a lot of the problems inherent in 3.5 era D&D. However, I've found a new darling: Swords & Wizardry Whitebox. It's simple, classes are easy to build, and its a fan favorite.

My first hurdle is kind of deciding what kind of cyberpunk to do: either pure or something along the lines of Shadowrun's fusion of magic and machine. On a quick thought, it might be better to do the pure approach first, and then approach the fantasy part in either an appendix or a supplement.

Next one is classes, which are kind of blasphemous for cyberpunk games but not for OSR. I have two options here as well: four very concentrated classes, or a wide variety of classes.

For the four, I will for sure have a Mercenary and a Netrunner. I will then either have a Professional and a Technician OR a Face and an Operative - this depends on how I want to handle the Netrunner.

Expanding beyond that gets a bit tricky, as I have a variable number of classes. The kind of common through-lines are: Mercenary, Martial Artist, Operative, Ganger, Netrunner, Technician, Face, Psyker, Icon, Cop, Corporate, Fixer, Nomad, Medic and Media. Doing research on other cyberpunk games and media, these ones seem to be the most common. I have variable arrays of which to include, so lots of options here.

So let me know what you think: which class option seems better to you?
Posted by Tanner Yea at 5:10 PM No comments: