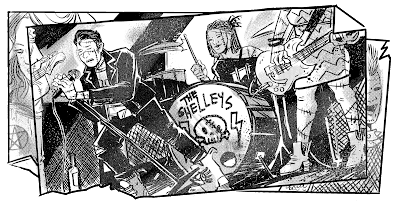 I know it has been a while, but I have exciting news - my new game, Nightcrawlers, is getting published through Exalted Funeral!

Nightcrawlers is a splatterpunk roleplaying game in the style of Nightlife and Nightbane where you play as classic monsters fighting against corrupt cops, sanity-blasting monstrosities and other monsters that want to destroy humanity!

The system is based on the Black Hack and features 10 supernatural broods to play as, as well as a host of powers and tools for quick play!

The art is being done by the amazing Sally Cantirino, who has done art for great comics like I Walk With Monsters.

I am aiming for an October release, and the game is probably 90% done aside from art. It'll be available in print via Exalted Funeral and also via pdf.

Keep an eye out for more news, and maybe some previews! You can also check out my itch (tanneryea.itch.io) for an alpha version that's 100% free.