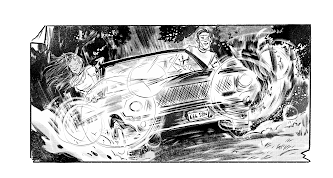 Hello all, and welcome to my first part of a post-mortem design diary for my splatterpunk game, Nightcrawlers! If you haven't picked it up, get it here or here or here in print.

I wanted to write this series to give an insight into my design process and why I did things a certain way. I've thankfully gotten many kind words for the game, but I just want to show everyone what goes into making a game. I hope you enjoy!

Nightcrawlers uses the game Black Hack as its main engine, but it wasn't originally that way. It started as a World of Dungeons hack that never saw the light of day, then over to a Swords & Wizardry White Box game that didn't see much development beyond some notes.

I chose Black Hack eventually for a few reasons - it's simplicity, it's wide amount of support material to crib and take inspiration from, and the small-but-mighty nature of the game. I worked on Nightcrawlers for literally almost three years, but my dev cycle when I changed to Black Hack took maybe 6 months.

I love monsters, man. Ghouls, ghosts, horror movies of all stripes, whatever. My problem is I don't love most play-as-monsters games. The juggernaut, World of Darkness, is too brooding and too unfocused. I wanted violence, aggressive music, sex and drugs - I wanted mixed monster crews! I felt that WoD and similar games were becoming power politics with magic, which is ok for some but not for me.

I also wanted a game of punks and optimism. Monsters are an easy stand-in for oppressed groups, and I wanted the game to be about finding brotherhood, power, support, and solidarity among outcasts. Punks fight for a better world even with the odds stacked against them, and I wanted my monsters to do the same.

Nightcrawlers is a modern love letter to those WoD heartbreakers of the 90s, where shedding blood while listening to Alice in Chains was all you could ask for - games like The Everlasting, Nightbreed, and the proto-WoD Nightlife. Nightcrawlers actually started as a retroclone of Nightlife, and I owe Nightcralwer's creation to it still.

Most of what is in the Character chapter is expected: stats, classes (in this case, Broods), backgrounds as skills, etc. However, there are two aspects of Characters that I think make Nightcrawlers stand out from other Black Hack-derived games.

The first, though it seems minor, is Nature. I struggled to figure out how to include features inherent to undead and spiritual beings for each Brood without overtaking their drawbacks and abilities. My answer was simply adding another character aspect: Nature. It's not a complicated rules rider, but it shows that sometimes adding a rule can simplify everything.

The second important aspect is the Goals. Experience in any RPG can go many different ways, but Black Hack mostly goes by the "progress when the GM says approach." This is totally valid, but I wanted players to be more engaged in what their characters did. Goals accomplish this by not only implying a character's backstory but also setting the course for what they want the game to focus on. The Goals mechanics mainly were taken from Dancing With Bullets Under A Neon Sun, which is a great game.

The Broods themselves probably had the most work done to them in design. I see classes and character options as the real bottlenecks for RPGs - they define what a character can and can't do more than stats, skills, etc. I'd like to do a shout out to Karl Stjernberg and his game Rad Hack, which informed a lot of my design decisions

The first big hurdle was just what Broods to cover. I obviously wanted the horror classics and and an even number to fit over the spreads. For a long time, I was going to have 12 Broods - the Revenant was going to be more like a zombie, and I would have added a Mummy and a Jekyll and Hyde-type Mutant. They got scrapped because I couldn't get the design how I wanted, but they may make a return sooner rather than later.

The next hurdle was defining what the brood could do and what it was weak against. This wasn't just a mechanical thing, but a narrative thing. For example, vampires have many variations in popular culture, so I had to decide what Nightcrawlers' vampires were like. I tried to keep to the common denominators of weaknesses and powers (vampires being weak to the sun, demons being weak to holy objects, etc), and I looked at other "play as monster" type games for ideas.

The scaling of the brood was also important. I wanted characters to be defined by their Edges rather than whatever inherent abilities they have for being a werewolf or ghost or whatever. Most of the scaling is in Edges and Spells, not in Special Features or Drawbacks. Health and damage were similar - I didn't want anyone significantly outclassed, so they mathematically stick close together.